Hospitality is a phenomenon that increasingly gets attention

in research all over the world and now becomes more explicitly an important element in the context of developing countries and their economies. At two rather different locations in terms of development phase, Bali and East-Timor, the Academy of International Hospitality Research (AIHR) presented its research as an outlet of Stenden Hotel Management School. Firstly, Stenden University Bali reached out to the counselors and lecturers from its feeder international schools on the island by offering them an AIHR Masterclass on personal leadership. Starting by referring to a number of different leadership authors, Sjoerd Gehrels (a licensed 7-Habits trainer) explained about the inside-out framework as constructed by late Stephen Covey, which to date is still the most purchased personal leadership method. The 7 Habits of Highly Effective People is estimated to have sold more than 25 million copies in 140 different languages and can be found in the self-help category of virtually every book outlet on airports and in bookshops worldwide. The participants expressed their 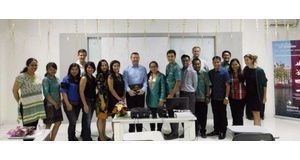 appreciation for the content because in the AIHR Masterclass the way of presenting was connected for many of them to their everyday personal life and work issues. At least one of the principles of the Stenden Bali feeder schools was so enthusiastic about AIHR’s presentation that she asked to have all their lecturing staff introduced into the topic. It goes without further explanation that such an initiative strongly emphasizes the links between Stenden Bali and the international schools that send their students.

Secondly, on behalf of AIHR a letter of agreement was signed

by the Innovation in Hospitality professorship with Stenden Bali’s host institution Sekolah Tinggi Ilmu Ekonomi (STIE) Triatma Mulya often referred to as Mapindo. Joined research will be undertaken on how innovation in hospitality (management) takes place on Bali currently. The cooperation between AIHR/the professorship Innovation in Hospitality and STIE will facilitate comparisons between the situation related to hospitality in The Netherlands and Bali. One of the interesting themes that calls for hospitality research is the remarkable hospitableness that Balinese people are famous for carrying in their genetic material, which makes them one of the most sought for groups of talent for luxury hotels and cruise lines. Dr. Putra Suarthana, owner/director of STIE is growing the institute’s research potential also in order to prepare the way for starting a master programme in the field of hospitality and tourism in the future. From this latter initiative Stenden Bali will benefit. In a next news item we will provide information about the fascinating, but historically challenged island of East-Timor and the International Conference on Emerging Tourism Destinations that took place there last week of October. 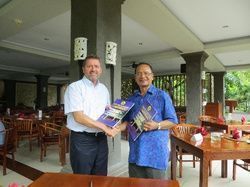