member. Sjoerd Gehrels fulfilled that duty and also presented a sample of AIHR research on the conference. It was fascinating to see how a country that in recent history fought for independence is now  developing an agenda to become a tourism destination with its unique own identity. East Timor close to Indonesia and 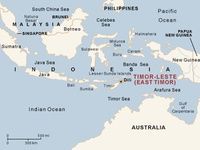 officially known as Democratic Republic of Timor-Leste comprises the eastern half of the island of Timor and the nearby islands of Atauro and Jaco. The first inhabitants are thought to be descendant of Australoid and Melanesian peoples. The Portuguese began to trade with Timor by the early 16th century and colonised it throughout the mid-century. After smaller fights with the Dutch eventually resulted in an 1859 treaty for which Portugal ceded the western half of the island. Imperial Japan occupied East Timor during World War II, but Portugal resumed colonial authority after the Japanese surrender.

East Timor declared itself independent from Portugal on 28 November 1975, but was invaded by neighbouring Indonesia nine days later. The country was later incorporated as a province of Indonesia. During the subsequent two-decade occupation, Indonesia made investments in infrastructures, but dissatisfaction remained widespread. Between 1975 and 1999, there were an estimated more than 100.000 conflict-

related deaths by killings and deaths from hunger and illness related to the Indonesian occupation. On 30 August 1999, in a UN-sponsored referendum, an overwhelming majority of East Timorese voted for independence from Indonesia. Immediately following the referendum, anti-independence Timorese militias, organised and supported by the Indonesian military, commenced a violent terror campaign. The militias killed approximately 1,400 Timorese and forcibly pushed 300,000 people into West Timor as refugees. The majority of the country's infrastructure was destroyed during this campaign. On 20 September 1999, the International Force for East Timor (INTERFET) entered the country and brought the violence to an end. Following a United Nations-administered transition period, East Timor was internationally recognised as an independent nation on 20 May 2002.

To support a new phase in East-Timor’s development the

government initiated the ICETD 2016 conference organised by the Dili Institute of Technology and the University of Algarve, Faculty of Economics, Portugal. The opening key-note speaker Professor Jafar Jafari, founding 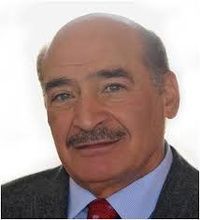 editor of the most famous tourism research journal, Annals of Tourism Research, provided a very interesting macro roadmap for a country to develop as a tourism destination. Jafari clearly pointed at the importance tourism and hospitality provision has connected to stability, peace and safety in a country. He used the hotel related metaphor of: ‘when terrorism checks in, tourism checks out’. Furthermore, the most important issue for an emerging tourism destination is to have a plan and not to let tourism develop by default. Another claim that Jafari considers crucial for tourism development, is that it should upgrade the quality of life of its citizens and not as can be seen in many mass tourism destinations generate a feeling of aggressive disliking towards tourists because a country or city gets overrun by them. Slow 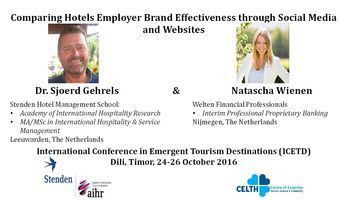 and small scale, step-by-step development are favoured which will allow the local people to adapt to the process and benefit from it. Jafari summarizes the idea as ‘a nice place to live is a nice place to visit’. On the ICETD conference, AIHR presented the research by Sjoerd Gehrels and Natascha Wienen on how hotel companies communicate their employer brand on social media and websites. The research paper will appear in the Research in Hospitality Management journal 6(2) in November 2016.