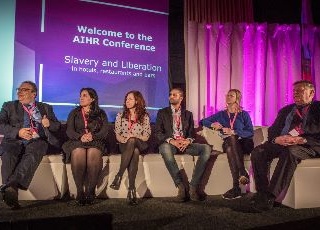 Slavery and liberation - some notes on day one (morning)

After a brief introduction by the dean of Stenden Hotel Management School, dr Craig Thompson, and the chair of the conference, professor Conrad Lashley, the first day of the AIHR conference started with an impressive key note by Irina Todorova, from the IOM Regional Office. She showed how human trafficking changed in the last ten years. For example, in 2006 84% trafficked people were women, in 2016 it is almost 50/50. Moreover more recently not only young people but people of all ages have been identified as victims of trafficking. Children trafficking is also increasing, as it seems to be less difficult than trafficking of adults and more profitable on the short and long term (e.g. sexual exploitation and crime).

It should be considered that many programs were set up to help girls and you g women sexually exploited and are struggling to cope with the new demographic spectrum. Moreover, bonded labour due to debts is usually investing all families also back home, and this makes very difficult for victims, even when identified, to get out of the circle. It is also unhelpful to identification that in EU when an immigrant is discovered to be trafficked, he ir she is not treated as a victim but immediately repatriated.

Partnership with academia (to find the best way to communicate so that behavior is changed) and with the professional field (such as cruise companies) is the best way to cut at the roots of trafficking. Essential is also to look properly at recruitment practices in the industry, direct and in the chain. IOM offer social audits to the industry where often cases are discovered that high management were shocked about. There are also initiative to unite businesses for ethical recruitment such as IRIS, CREST and Leadership Group for Responsible Recruitment.

At the end of her presentation, Irina referred to the UN SDGs, the Global Compact for safe, orderly and regulated migration and ICAT as international umbrella organizations. Yet she also warned that proactivity is needed to prevent trafficking and exploitation (for example as making part of any humanitarian crisis), and not only try to fought against it when it happened.

Erwin van der Graaf, from AccorHotels, spoke about the fine line between service providing, taking responsibility and liability. The main issue is hereby where does hospitality ends and social responsibility begins? It is indeed a fine line, and yet action is needed.

To frame the issue Erwin referred to ECPAT's reports on human trafficking in the Netherlands. He also demystifies some current ideas about sex trafficking, for example that the majority of sex tourists are pedophiles. In fact above 90% of sex tourism is coincidental. Also he pointed that by law someone is a child if she or he is below 18, not below 16 as most people think.

After pointing to the amount of pain that human trafficking causes with reference to the Dutch 'Valckenburg case', Erwin presented the initiative of the Dutch hotel industry that started in 2012 as a cooperation between the hotel sector, police and the Ministry of Justice to fight sex trafficking.

This cooperation led to a campaign 'Please disturb' that is now running not only in Dutch hotel but has also be offered to all hotel schools to be shown to their own students.

Alexandros Paraskevas from London Geller college of hospitality and tourism (Univeristy of West London), widely researched human trafficking in the European hotel sector. He started by reminding the audience that hospitality is of course broader than hotels, and that doing research on this topic in e.g. ethnic restaurants is even more sensitive and, literally, dangerous for the researcher. He shared the story of four people, UK hotel staff members touched by human trafficking and exploitation with whom he spoke during his research.

The Polish 'Justine' for example who was working in the cafeteria and applied for a position at the accounting department holding a degree in finance. During a due care check it was discovered that she was in fact a victim of trafficking, where she got into through a recommendation by her uncle who encouraged her to go to England to work in hospitality and pay for the health costs of her young boy. The uncle was in fact a member of a criminal organization, and the end in mind of the gang was to get her in a front desk or check payable position so that she would be in a position to share personal guest information to the gang.

'Osama', a Somali worker, was promised a position in hotel maintenance for which he paid 4000 pound to the smuggler. He ended up working for a Russian contractor being paid 4 pound per day and thus being incapable to repay the debt. He worked as an outsourced maintenance employee in hotels. None checked on its credential.

'Louise' worked as a chief security officer. Once she received a letter for the owner that she was allowed to open. There was an offer for the provision of young girls for parties. She warned the GM and the police, and a fake party was set up after having identified the pimp. Louise was threatened to be killed by the criminals, and was fired from the hotel because she had brought discredit to the hotel.

'Ben' is a GM in a very luxury hotel. One of his major account is an Arabic prince who comes regularly and spend vastly. Yet two of the young Philippine maids of the prince report to the hotel housekeeper to be kept as slaved, beaten and sexually exploited. Ben decided not to report to the police so that he would not jeopardize his to come promotion. Yet the housekeeper reported and Ben was fired.

In concluding Alexandros showed an analysis of the nodes in the hotel operation, both front and back office, that could be acted upon to disrupt the journey of a trafficker while protecting the guest journey. And shares information on the COMBAT_ TBH toolkit developed after his research in UK.

Sian Lea from the Shiva Foundation (of Shiva Hotels) underlined that hotels are at risk because of several processes, such as outsourcing housekeeping or maintenance via agencies thus transferring responsibility to check on the background of the outsourced employees. Agencies often work with other agencies, thus forming a quite inextricable net of multi-tired recruitment systems. Hotels, as Erwin also shown, are at risk to become places of sexual exploitation. Finally, exploitation may happen all along the chain. Still, hotels quite rarely open up to programs to avoid exploitation. May be because they have not yet been victims of big scandals such as, for example, companies in the fashion and textile industry (think for example about Nike).

One of the components of the Shiva foundation approach is transparency, and communication of their commitment to tackle human trafficking openly in the hotels' lobby. Staff training is a second important pillar, both on the floor and at head office. Collaboration with the authorities such as the police, expert organizations and stakeholders in the chain is, as Erwin also showed, essential. Sian left the audience not only with the impression of her personal passion for the theme, but also with a  clear view of what hotels could do and do to fight human trafficking in all its forms.

The last speakers of the morning come from Comesha and Fairwork, two Dutch NGO supporting the fight against human trafficking. Main activities of Comesha is data gathering and awareness creation. Awareness creation and support for the victims is also the aim of Fairwork. Awareness creation may also be voicing new Dutch legislation such add the law in chain responsibility making hotels liable for paying wages of staff that is outsourced but has not been properly remunerated. 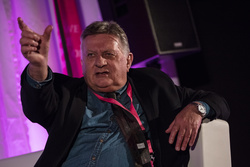 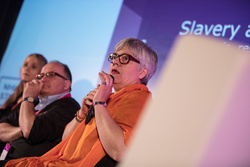