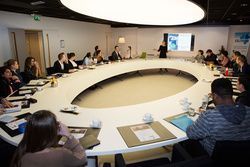 'sustainable strategies for events' to its main Frisian stakeholders: the Municipality of Leeuwarden and the festival Welcome into the Village. This afternoon has been organized by Stijn de Haan, a student of the event management minor, in co-operation with Amber Herrewijn.

After a brief word of welcome by Dr Elena Cavagnaro, the project leader from Stenden, Bouwe de Boer, energy coordinator from the Municipality of Leeuwarden and Sjoerd Bootsma, director of the Welcome into the Village festival and of the sustainable energy program for Leeuwarden Capital of Culture 2018, joined Elena Cavagnaro in a debate on the role of festivals in the transition towards sustainability. Amber Herrewijn skilfully played the role of moderator. 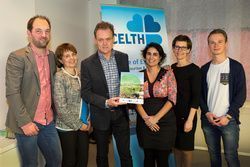 speed up the transition towards renewable, sustainable energy. Yet nobody knows about these initiatives because Frisian entrepreneurs and citizens prefer to work hard and not to speak much about what they do. To counteract this tendency, he decided to design a project to render all these initiatives more visible. The aim of the project is highly ambitious: to make Frisia the first fossil free province on Earth. As a step towards this aim the Municipality of Leeuwarden launched the project 'two weeks fossil fuels free'. This project is a cooperation between the Municipality, Urgenda (a major Dutch NGO for sustainable energy), the bus company Arriva with its 300 busses, 75 communities and several other partners. The aim is to make the whole province of Frisia with its 650,000 inhabitants free of fossil fuel transportation in the first two weeks of July 2018. With this project Frisia intends to set an example for all Europe.

The motto? From A to B: fossil-free! 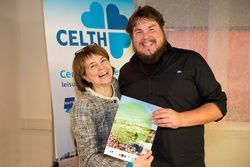 cooperation. Cross-sectorial cooperation is badly needed to solve wicked problems such as the transition towards sustainable energy. For example, one festival alone will never be able to abandon fossil fuels for renewables. It is much too expensive and complicated. To get the needed economies of scale, at least 20 festivals need to join so that a supplier of, for example, third generation bio-fuels can deliver in an economically feasible way.

Sjoerd is glad to see that sustainability is much more on the agenda now, not only at the level of the municipality, not only at the level of the Province, but also in the board rooms of the suppliers of technology. Festivals can offer a ground to test innovative technological solutions. In fact, in Sjoerd's view "the true meaning of art is to transform society". This is the reason why the festival he directs, Welcome into the Village, is open to seriously engaged people who wish to test a sustainable idea. This is also the reason why he cooperated with the cigarette butts project. This is also the reason why he is convinced that some years from now his festival will be completely fossil fuels free. To start with, people will be encouraged to come by electric car and, who knows, in the future the same cars may be used as storage of the (sustainably won) energy needed to power the festival at night.

Bouwe agreed that "festivals are a sustainability accelerator" and Elena observed that festivals such as Welcome into the Village have reached the limits of the 'reducing' strategy and are now focussing on redesigning the whole festival environment, from the food offer via the energy to the used materials. The aim is to become waste-free or even better, as it was suggested during teh EPIC conference at Eurosonic Noorderslag, to become resource reach. In this sense, Elena concludes, the Frisian festivals are now far beyond the reach of certification schemes such as GreenKey that is still mostly focussing on reduction.

At this point in the debate, a student from the audience asked how the festivals are communicating their sustainability efforts. Sjoerd referred to the 2015 project around the cow ‘Janneke’ (see photo by WttV/Hans Jellema) that was bought by 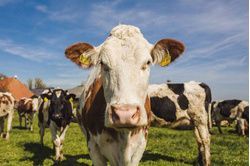 the festival, fed and then slaughtered so that all of it could be eaten during the festival. This story, intended to reconnect people to their food and to promote a full use of animals, attracted enormous publicity - of which some negative. Yet, Sjoerd reminded the audience, also negative publicity is still publicity.

After the debate, a short game and two presentations followed. In the game Marisa de Brito (NHTV) tested our knowledge about cigarette butts. Did you know that it take only few hours for a cigarette butt to pollute water? May be unsurprisingly sustainability champion Bouwe de Boer won the game.

The first presentation was delivered by Hugo Smorenburg (NHTV master student) and the final one by Wilco Camp. They presented outcomes of the research that can be found in the report.

You are all invited to download the report from my Research Gate page.

To conclude, I wish to thank the colleagues and students who attended, and in particular the members of the Advisory Board of Stenden Tourism and Leisure Management who, led by Falco de Klerk Wolters, joined the symposium. Thank to you all for your presence and stimulating questions.