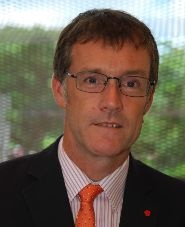 Stenden HMS is pleased to announce that Erwin Losekoot has been appointed as professor Hospitality Studies at the Academy of International Hospitality Research. he will take service from October, 1st.

Erwin Losekoot was born in Purmerend just north of Amsterdam, but has since then lived overseas.

He travelled widely with his parents before completing a BA in Hotel and Catering Management at Strathclyde University's Scottish Hotel School in Glasgow, Scotland. As a student he completed an industrial placement at the Amstel InterContinental Hotel in Amsterdam. On graduation he worked in the Purser's Office onboard P&O Cruises sailing to Alaska, Mexico and the Caribbean before returning to the UK to work for Sheraton Hotels in Edinburgh, Cameron House Hotel on Loch Lomond, and then Holiday Inn Crowne Plaza Hotel at London Heathrow airport. He completed an MBA at Edinburgh University and took up the position of the Sir Hugh Wontner Lectureship in Hospitality Management at Strathclyde University in 1999, during which time he also taught on programmes delivered in Iran and Hong Kong. Ten years later he moved to Auckland University of Technology in New Zealand as Senior Lecturer. He taught hospitality management and also completed his PhD in the area of the customer experience of airports. He left AUT to become Academic Head of Programmes at Auckland Institute of Studies. Most recently he was teaching and researching at RMIT University in Saigon, Vietnam. During his academic career he has published 24 refereed journal papers, presented over 30 refereed conference papers and published three book chapters. Most of these have been about the nature of hospitality and how we can make places and people more hospitable. He is on the editorial board of one academic journal and reviewed papers for many others. He is a Fellow of the Institute of Hospitality, a Fellow of the Royal Geographical Society and a Fellow of the Higher Education Academy. When he was a young academic he witnessed the publication of Professor Conrad Lashley's early work on the meaning of hospitality, and is therefore excited to be following in his footsteps now.